On December 3rd, 2013, CNS Foundation hit the I-5 South to attend the 2013 World Stem Cell Summit in San Diego, California!

The World Stem Cell Summit (WSCS) is a multi-day networking event that connects
industry, academia, government, and patient advocates with the goal of accelerating the discovery
and development of cures and therapies. With over a thousand attendees from
around the globe, a variety of panels and speakers represent science,
legislation, patient advocacy, regulation, and financing, amongst other disciplines, in
order to advance the field of regenerative medicine.

The Summit officially began on the morning of Wednesday,
December 4th, when Bernie Siegel of the Genetics Policy Institute (GPI) kicked off the event with opening remarks. The Genetics Policy Institute is a nonprofit organization that is “the leading promoter and defender of stem cell research and other cutting-edge research targeting cures.” GPI hosts the annual WSCS in order to further this agenda. During his remarks, Siegel noted:

“People always ask when we are going to have that big
scientific breakthrough. I tell them we already have. Stem cell science has
changed the way that science and medicine think about disease.”

The role of patients and patient advocates in advancing
regenerative medicine were front and center at two panels sponsored by the California Institute for Regenerative Medicine (CIRM), tying into the overarching concept of stem cell science having the power to change how science, medicine, patients, and patient advocates are able to think about disease.

The first panel sponsored by CIRM featured me, CNS Executive Director Alex Richmond, speaking on “How Patients and Patient Advocacy Organizations are Impacting Advances.” With Judy Roberson of the Joseph P. Roberson Foundation and Don Reed (@diverdonreed) of the Americans for Cures Foundation, we, as patient advocates, discussed the variety of ways that non-scientists can have an effect on science. Roberson noted the importance of becoming involved with the science through meeting researchers and attending meetings- by making a front and center presence as an advocate. Reed stated the importance of using scientists and legislation to begin making changes to science, and as a key player in the passage of the Roman Reed Spinal Cord Research Act, Reed’s expertise is in using legislation to alter the course of scientific advancement. I spoke on the role that CNS Foundation plays for families seeking answers to science, and specifically the ways that CNS Foundation makes hard-to-understand science accessible while connecting researchers, families, and other organizations with one another. Putting science in the hands of all eases the process of moving to legislation, contacting scientists, and the transition to becoming an advocate for specific diseases. Kevin McCormack, panel moderator and CIRM Director of Public Communications, announced the creation of a Patient Advocacy Toolbox by CIRM to address some of the problems many people have with the disconnect between scientists, patients, and patient advocates, with emphasis on the panel topics covered. CNS Foundation is excited to participate in this project. 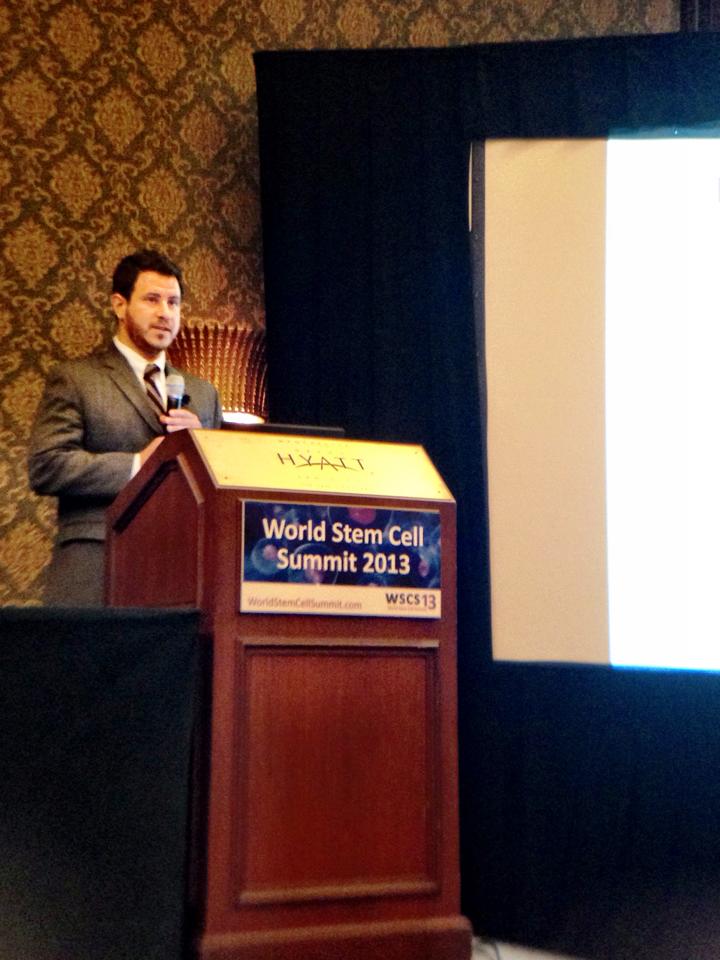 This well-attended session ended with an important question posed by a scientist in the audience who asked “What kinds of things can scientists and researchers do to help patient advocates make science accessible?”, firmly cementing the necessity of collaboration. In direct response to this, CNS Foundation approached Ben Paylor (@BenPaylor), creator of the StemCellShorts video series, Paul Knoefler (@pknoepfler), Associate Professor in Cell Biology and Human Anatomy at University of California-Davis, author, and creator of Knoepfler Lab Stem Cell Blog, Lee Buckler (@celltherapy), Managing Director of the Cell Therapy Group, a cell-therapy blogger with Cell Therapy Blog, and the GPI about the possibility of creating a panel for the 2014 World Stem Cell Summit around effectively communicating science to the public. With a positive response from all, CNS Foundation is hopeful that this connection between scientists and advocates will continue to strengthen the field of regenerative medicine.

The
second panel, “New Technologies and Infrastructure to Empower Patients” highlighted
the need for and subsequent creation of Alpha Clinics for clinical trials. Hosted
by Don Gibbons, Chief Communications Officer for CIRM, this question was posed:
the Internet can provide a lot of information, and not all of it is accurate-
where is the line between having knowledge and being an empowered patient? This
question was answered by panelists Greg Lennon, PhD, Amy Adams, Communications Manager for CIRM, and Maria Millan, MD.
Lennon noted that “DNA is not destiny” and as genetic information changes, patients
are able to take control of this information to pursue relevant treatments if
necessary. Adams commented on the prevalence of the information found online
being used by many to self-diagnose and the importance of recognizing good
versus bad information. Finally, Millan put these two pieces together by introducing Alpha Stem Cell Clinics,a network
for future stem cell trials and treatments. CIRM envisions a physical space
where sponsors and patients can go for clinical trials. The Centers would
maintain information and answer questions regarding stem cells, treatments, and
disease.

Pediatric neurology made a special appearance at the Conversations with Experts Luncheon, where CNS Foundation Scientific Advisor, Dr. Evan Snyder, Director, Stem Cells and Regenerative Biology Program at Sanford-Burnham Medical Research Institute, led a conversation on pediatric neurological disorders and stem cell strategies. This lunch-time discussion was a roundtable consisting of representatives from all backgrounds. Evan discussed the current state of science and research involving stem cells to treat pediatric neurological disease and model these diseases in a dish. This presence was one opportunity where attendees of many different areas of expertise spoke together about the developing brain and its current place in stem cell science and disease treatments. 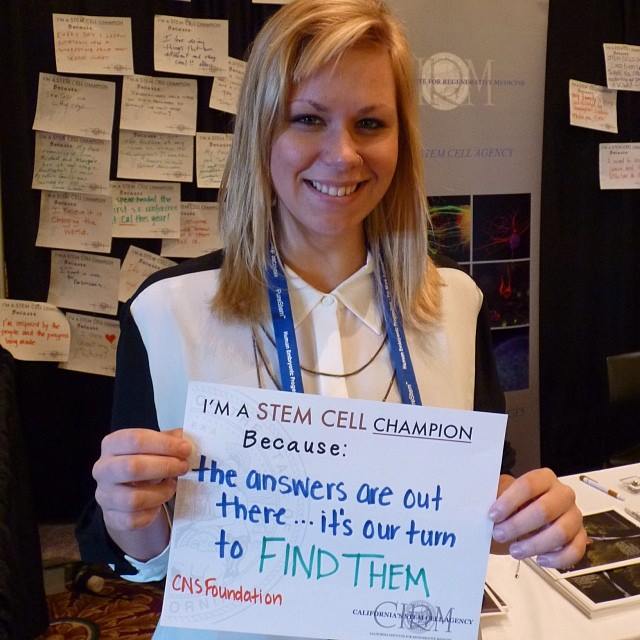 As noted by CIRM President Alan Trounson in this quote from his keynote speech:

“Working together will make these things come together. Hiding behind individual papers makes this work more difficult.”

The notable quotes by Siegel and Trounson exemplify much of the work that needs to be done, not only in the scientific and research fields, but also in the work that nonprofit organizations must be doing as well. The science of regenerative medicine is so new, with so much uncharted territory that what must be considered “breakthroughs” are going to be small mile-markers that will eventually add up to highlight the enormity of these advances. This simultaneously works with Trounson’s point- for these to occur, science needs to be a collaborative partnership as opposed to a competitive endeavor to make the most of the advances that are steadily being made. Indeed, that is the point of the Summit- to highlight the research being done and connect relevant scientists, organizations, industry, patients, and patient advocates to one another to utilize the powerful tool of collaboration.

There are great benefits to a large-scale program such as the World Stem Cell Summit compiling so many scientists, researchers, industry, patient, and patient advocates. CNS Foundation was able to meet one-on-one with many top scientists in the field and learn, first hand, about the exciting advances taking place in laboratories around the world.

Don Reed, in his World Stem Cell Summit write up in the Huffington Post, makes this note about the Summit, “It was difficult to pick out highlights of the World Stem Cell Summit–it was all highlights.” These connections are beneficial moving forward, relationships made and strengthened, and CNS Foundation widens the field of experts accessible to answer questions from the CNS Foundation community.

CNS Foundation would like to give a special thanks to Bernie Siegel and the Genetics Policy Institute for the opportunity to attend the 2013 World Stem Cell Summit, the California Institute for Regenerative Medicine for their gracious scholarship and inclusion on the “How Patients and Patient Advocates are Impacting Advances” panel, Judy Roberson and Don Reed for being excellent co-panel speakers and advocates, and Kevin McCormack for being a fantastic moderator.